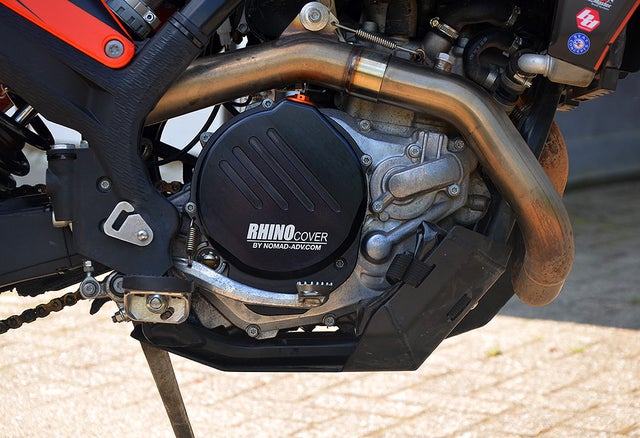 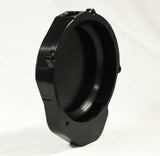 SKU:
€155.00
€155.00
Unavailable
per item
PRICES INCLUDE EUROPEAN TAX, TAX CAN BE DEDUCTED HERE (ex VAT: €128.00)​
​
Introducing the Nomad Rhino Cover
EXC Clutch covers are notorious for cracking or even holing when thrown up rocks hit it. When that happens the engine’s internals are exposed to sand and dust while the ‘missing’ parts of the clutch cover are rampaging around inside the gearbox… Not a healthy situation. ‘Protecting’ your clutch cover with a plastic nappy results in high engine oil temperatures as the clutch cover also functions as a cooler.
The second problem, we feel, is the limited oil capacity. By enlarging the clutch cover we increase the oil capacity and at the same time the increased air pocket above the oil level reduces internal pressure on seals, gaskets and piston rings.
The Nomad Rhino clutch cover is seriously strong, the strongest one available we believe. We start with a very high grade of billet aluminium, from which we machine a cover which is 4mm thick on the outside. Even the part protected by your boot is still a solid 4 mm thick, while we rounded both the outside and inside corners to create an 8 mm thick protection where it counts. That’s more than serious skid plate type strength! The pocket under the clutch is there to trap any debris coming from the clutch, to prevent it contaminating the oil and being pumped around in the engine. The pocket has its own drain bolt, recessed in the cover to prevent it being damaged by rocks, with the same Torx size head as used by KTM (no extra tools needed for an oil change).

The extra oil capacity allows for extended service intervals, while the increased surface area keeps the oil cooler. We use our own EXCs as a travel enduro and as we are in Europe we have to cover long distances over motorways to get to the good bits in Europe. Trips to Sweden and Norway means 1100 km long runs over the Autobahn, notorious for its massive traffic jams in hot summer temperatures. Once we enter Sweden and Norway we go off-road. Summer temperatures in Norway and Sweden regularly top the 30°C (86+°F) mark, add climbing up steep mountain tracks while loaded up with camping gear and the engine has to work hard. Yet even in those conditions we can safely extend the oil change intervals to 3,000 km as the increased surface area of the Rhino cover helps to cool the oil and keep it within its optimum range. After 3,000 km the engine oil hasn’t reached the end of its life yet, its dopes haven’t burned away and it’s still brownish in colour rather than black. Could we do 5,000 km? Maybe, but when it comes to engine longevity we err on the safe side and replace it every 3,000 km, it only takes 10-15 minutes to do.